Short fibre content in cotton: The next big challenge for spinners

This article aims to examine issues with regards to origins, evaluations and limits acceptable, creation, elimination and the effect of short fibres in the final product of spinning namely yarn.

We have been witnessing a steady increase in short fibres in the cotton being traded and supplied in recent times. This is a real big problem the cotton spinners are facing after decades of issues related to contamination. At least we have partially solved the contamination issue with various initiatives both in farming, ginning and spinning side. But, will the higher short fibre presence drastically reduce all the improvements made in the fragile spinning technology which we have pushed the limits in the last decade?  This short article aims to answer this question.

Cotton fibre length and its distribution is a genetic character and it varies with species and within species.it also varies with varieties

Hence, we can understand that the right species, same variety of seeds, water and nutrition supply during crucial periods of growth are all very important to obtain lint with very less short fibre content. 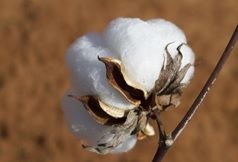 A simple definition of a short fibre or classifying a fibre as short is considering any fibre less than 12.5 mm as short. Over the ages we have had many systems and evaluation methods of fibre length distribution in the lint, with many instruments used. We will examine the contemporary measuring system and the instruments employed. HVI and AFIS of Uster technologies and equivalent instruments from many other testing instrument manufacturers are used in determining the length of fibres among various other parameters of cotton. Let us consider the HVI and AFIS evaluation of Short fibres in this article.

While HVI is designed to measure fibre length from a bundle of fibres using linear regression equations and algorithmic calculations, AFIS measure single fibre characteristics. We derive Short fibre Index SFI from HVI whereas AFIS gives us Short fibre content in Numbers SFC(n) and Short fibre content by weight SFC (w).The data derived by HVI is widely used for determining quality of cotton by most of the industry and traders. However, when it comes to calculating the short fibre content, there are shortcomings in this measure as the calculated values do not correspond to knowing the actual figures.

SFC(n) data determined by AFIS should become the industry standard to determine the short fibre content in the tested sample, be it lint, sliver, or roving. Once we choose the right method of evaluation, the guidelines to set standards and adjust the process of yarn manufacture based on the results becomes easy and focused. Given below is the Uster standard for the SFC(n) at various stages of manufacture for both carded and combed yarns. 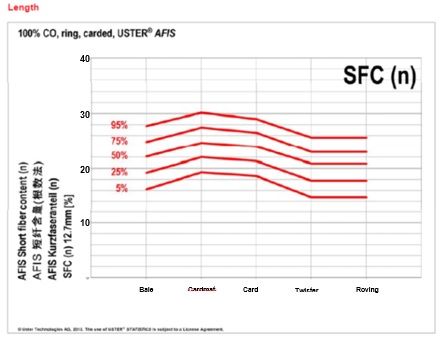 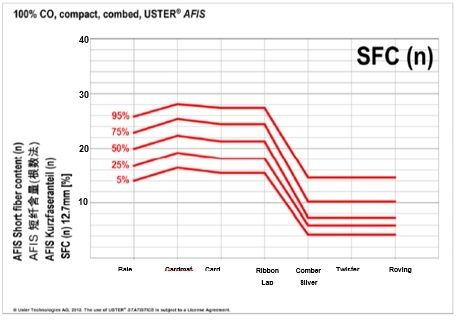 Short fibres are created by

We will now go into the reason of how and to what extent the fibres are damaged in various stages of yarn manufacture.

Reduction or elimination of short fibres before yarn forming

Fibres below 12.5 mm in length neither contribute to quality or strength of the yarn. The higher presence of short fibres in roving becomes a nightmare for spinners particularly when we face problems for minimum number of fibres required in the cross section to spin a particular count. We need at least 75 fibres in case of carded and 35 fibres in case of combed yarn in the cross section. The IPI values and end breaks shoot up and productivity is lower. Hence reducing the SFC at every stage becomes important, but due care is to be taken to also maintain yarn realisations as it is very difficult to eliminate only short fibres once created. Let us look at how we can do a balancing act.

Genetic causes: The ginners mostly own the farms or advise farmers on the cotton requirements.it is important that the whole value chain understands the importance of lower levels of Short fibre in the lint and take appropriate action as stated earlier to grow cotton with care.

Effects of Higher SFC in Yarn

Short Fibre Content by Number is the most significant fibre property which has to be monitored on continuous basis and can cause processing as well as excess fibre loss resulting in higher manufacturing cost as explained in the table below. This table clearly lists out the additional cost incurred per kg for various levels of Short fibre below 12.5 mm in the incoming cotton. A bale with 35 per cent SFC(n) will result in almost half a dollar additional raw material cost with many working problems and quality issues. Any Cotton lint with above 25 per cent SFC(n) is a nightmare for a spinner.

The proportion of short fibres has a very substantial influence on the yarn parameters namely end breaks, strength, IPI values, hairiness and uniformity. Production losses due to reduced speeds is another major factor to be considered. Besides this, a large proportion of short fibres also lead to considerable fly contamination (among other problems), straining personnel, the machines, the work- room, the air-conditioning, and also leads to extreme drafting difficulties. Unfortunately, the proportions of short fibres have increased substantially in recent years in cotton available from many sources. The table below highlights the effects of higher SFC in the cotton lint on various yarn parameters.

Care must be taken to test as many incoming bales as possible for SFC(n) and set limits for the rejection of the supply based on this parameter. Once the cotton is in and the processing starts, testing and monitoring of the process should be the only mantra to control the quality costs.

R Janarthanan is the COO of Texcoms Textile Solutions, Singapore.