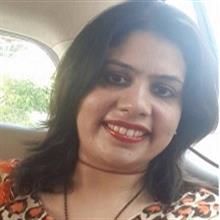 How can manufacturers utilise technology in supply chains to improve the sewing process.

Sewing room operations are an integral part of apparel production. Improved productivity and efficiency can be ensured by enhancing sewing machine performance, reducing machine downtime and adding computer interface to conventional machines. Traditional, domestic as well as industrial sewing machines have witnessed a significant makeover in recent times. Apparel and accessory manufacturers are utilising high-tech, automated systems in their supply chain to make the process more organised and labour efficient.

Optimisation of output membership functions and self‐learning for sewing machines have become feasible with fuzzy logic implemented in a neural network, which can be trained with input parameters to predict the conceivable output. Industrial lockstitch and overlock sewing machines have been trained using the neural network technique and are gaining widespread commercial acceptance.

Optimum settings are achievable under static and dynamic machine conditions as the raw material properties are known. Apart from fuzzy logic and modelling, makeover of the conventional sewing machines through computer and robotic intervention, incorporation of sensors, actuators, work aids, improvised stitch regulators and feed mechanisms has paved the way for better material and resource utilisation. Furthermore, reduction in machine downtimes and in turn improved productivity and efficiency as a result of automation and better work practices can serve as boon for apparel and accessory production houses.

The principle of sewing machines and stitch formation has hardly changed since its inception. However, significant progress has been made to the technologies that enhance machine performance. The machine is the basic workhorse of the clothing industry and has numerous applications with its associated work aids.

New construction material and improved electronic systems have played a crucial role in these advancements in speed and stitch regulation, timing of needle and looper system. The sewing machine speed can be regulated according to the material being sewn, thus contributing to the improved productivity.

Robotic sewing machines tackle the problems of automated sewing in numerous ways. Stitch tracing is enabled in the machine through a camera-computer interface introduced in the recent modern models of sewing machines. The machines show increased accuracy via utilisation of high-speed photography that can capture up to 1,000 frames per second. The captured images are thereby manipulated by software to produce a higher level of contrast. Computer can pick out individual threads in the fabric by the captured vivid image. The robotic sewing machine counts the number of threads to determine the stitching position rather than the fabric measurement. Consequently, any fabric distortion caused by the punch of the needle can be measured with exact precision. The measurements also serve as a guide for feed dog to make any necessary adjustments for smooth and even fabric feeding.

Integrated automatic hemming units improve productivity and consistency of lap seams reducing the operator’s burden as he has to just feed the fabric. As the operator loads the fabric components on the guide/feeder, the unit completes sewing and disposes the hemmed garment. 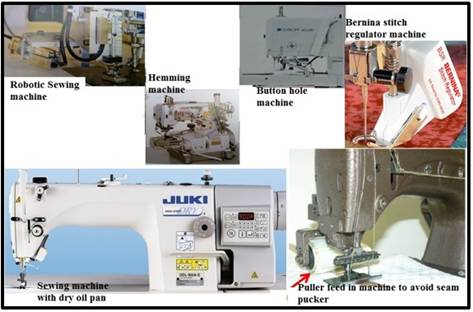 A glimpse of sewing machines laced with recent technologies

German sewing technology (Duerkopp Adler) is credited with the inception and development of the automatic button hole machine, which is equipped with a thread trimmer for the needle thread and can make buttonholes with a maximum sewing length of 68mm width or without round tack, cross tack, and with or without an eye.

Supplying oil externally to running machine parts is quite painstaking and the operator often ends up staining the fabric with oil. The solution lies in the development of machines that require minimum lubrication and use anti-friction bearings. Additionally, dry oil pan system in sewing machineries ensures that the oil pan is concealed and integrated into the sewing machine bed, thereby arresting any oil leakage and keeping the machine bed clean during the entire sewing operation.

The needle bar is lubricated with minimal quantity of oil compared to conventional models. Moreover, the need for frequent machine cleaning is eliminated and shielding of oil splashes is possible with the newly developed frame oil recovery and automatic oil circulation mechanisms.

Another salient feature is the incorporation of compact energy-saving direct-drive motor in the machine. The motor manages to save power consumption by 25 per cent and a new retry control aids in increasing the needle penetration power by approximately 10 per cent. The state of the art model is capable of maximum achievable sewing speed of 5,000 stitches per minute.

Traditional free-motion sewing techniques while sewing at a particular machine speed pose challenge in maintenance of harmony in fabric movement and the stitch length. The pursuit of achieving an even stitch pattern is an exhaustive and complex process with the conventional machine models.

The problem can be overcome by introduction of Bernina stitch regulator. The regulator makes the process less time-consuming and enables the operator to master free-motion sewing technique.

BSR system is capable of sensing the fabric surface under the presser foot. The information sensed by the sensor is transferred to the sewing machine during the fabric movement. The required sewing speed to sew consistent stitches according to the predetermined stitch length is calculated by the sewing machine. A slower needle movement and motor speed is required if the material is moved slowly, while faster fabric movement demands faster needle movement.

The innovative stitch regulator system functions in tandem with the sewing machine, thereby automatically adjusting the stitching speed for even and consistent sewing. The stitch length regulator outshines the traditional free-motion stitching and can easily maintain a consistent stitch length as the feed dog is lowered for fabric movement.